Team BLE 13U and 14U team made its’ way down to Las Vegas for a mini camp and then compete in the competitive Red, White and Blue classic tournament being held over the Presidents day long weekend from February 13 – 15. The teams had a treat as they were able to utilize the Big League Dreams complex for their mini-camp and work out at the replica fields of Chavez Ravine (Dodgers Stadium) and Wrigley Field (Chicago Cubs). It was two full days of work at the complex that allowed the guys the opportunity to utilize the great weather and fields to hone up for their skills for the upcoming tournament. Plenty of ground balls, fly balls, batting practice and an intersquad games was in order leading into the weekend tournament. 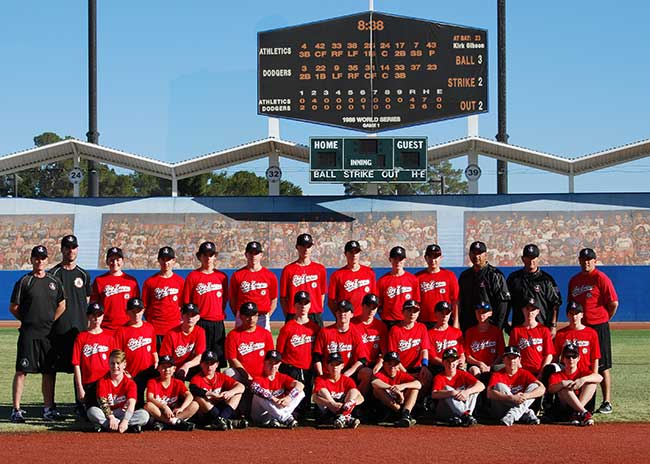 The staff was once again stoked for the event and included former Major Leaguers Bob Didier and Albie Lopez along with former Canadian Olympic team coach Marty Lehn, Vancouver Island University head coach Jordan Blundell and Player development co-ordinator and coach for the Okotoks Dawgs Allen Cox.
The Tournanement:
13U’s :
Saturday, February 13th – A great start to the tournament as they win both games. Game 1 was against a Las Vegas club who sent their ace to the mound who minimize the BLE offense to just one run over 4 innings, however the bats came alive in the 5th as the Vegas team made a pitching change and the BLE boys capitalized with 4 in the 5th and 5 more in the 6th.
– In the second it was more of the same script as the boys faced a good Utah team who sent their ace to the mound with it being their first game of the tournament. Once again it was just a matter of time and the bats came alive for a decisive 12 – 1 victory. We must tip our caps to our pitching staff and catchers who did a great job minimizing the offense of the competition.

Sunday, February 14th – After a good nights rest the boys laced them up vs. another Las Vegas team and made quick work of the Puma’s as the staff held the opposition to just two hits over five innings and the scored 8 to take their record to 3 – 0. Up next was a very good team out of Colorado and the most competitive and best game of the tournament for the guys. The Colorado Selects pitcher may have been the ace of the tournament and dominated our hitters and left the game after 4 with a 3 – 1 lead. The boys needed to win and only gave up 3 to be the number one seed in their division and get a bye to the semi final game and went after it by mounting a great comeback and going up 4 – 3 in the bottom of 7 with two. Unfortunately the feisty Colorado club was able to get one across and the game ended in a tie. As much as we wanted that victory and great victory it would have been, justice was probably served with a tie. With that tie the boy’s record was 3 – 0 – 1 in round robin play and off to the playoff round we would go to face a New Mexico team that was 3 – 1 on the other side of the draw.
Monday, February 15th – A slow start to the single elimination playoff game as the previous nights game seemed to have an effect on the early morning start. With a 7 – 3 deficit heading into the 5th the boys were able to score 3 in the 5ht and then explode for 7 in the 6th to take a 13 – 7 victory. Concerning to say the least, but the boys got’er done.

Game two – Semi Final matchup – The boys are playing their sixth game of the tournament against the 5th different state (pretty cool – Nevada for 2, Utah, Colorado, New Mexico & Arizona). This time the matchup was vs. Arizona Athletic White. An undefeated team that showed they were solid all the way through the lineup. Team BLE took and early lead by putting up 2 in the top of the first and then struggled to score more. Hats off to Arizona team as they put the pressure on the defense and picked away to take the lead 3-2 in the third and then pulled away in the 4th and 5th to defeat our guys and move onto the final. Eventually the Arizona team wins the Championship with a victory over a team from Utah. All in all a great effort by the guys. 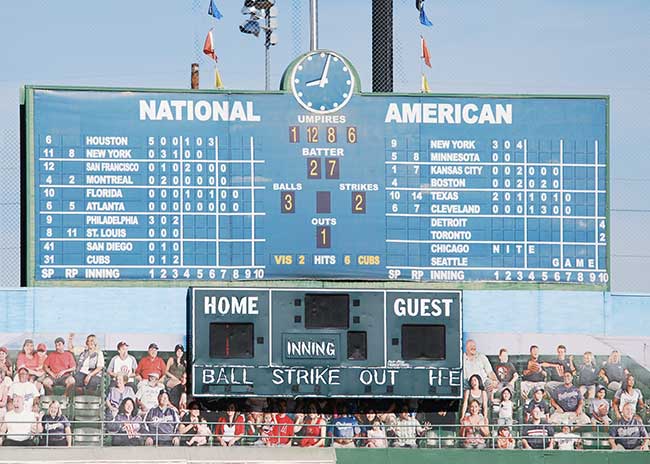 14U’s
Saturday, February 13th – A great start to the tournament as the club comes out strong and wins their first game decisively with good offense and strong pitching as they defeat the South Nevada club .

– In the second game it was a different story as the boys let the CBA Pumas team from Henderson jump out to a big league early. As the guys tried to mount a comeback, they ran out of time as the two hour limit came into effect and the guys took a 12 – 6 lose.

Sunday, February 14th – With a 1 – 1 record leading into Sunday the guys needed to have a good day and win two to advance into the playoff round. The first game of the day had them facing another 1 – 1 team with playoff implications on the line. Going down early in the game with some tough luck, the guys picked their way back into the game but just couldn’t make that key play or get that big hit to get over the hump. The Cougars end up defeating Team BLE 9 – 7.

Game two of the day had the guys playing for pride vs. a San Diego team that was still hopeful to make the playoffs. With playing the spoiler role on the line the guys lost another tough one as the San Diego club wins in a walk off fashion 9 – 8 and advances to the playoffs.

It was a tough day at the yard for the guys as both games were winnable games, but lessons were learned as the guys didn’t take advantage of opportunities when on offense and struggled to minimize their mistakes when on defense. All in all a great effort for an early season tournament.

Las Vegas Wrap up: It was 5 days of baseball in which the competition was good, the weather was outstanding and it was a great way to get 2016 season started. The guys bonded well and had off field time to meet new friends and have some fun at the pool and hanging out.
AS a staff we thank you for your efforts in Vegas and encourage you all to continue working hard at honing up your skills and take advantage of those days you had in Vegas. Best of luck to a great season and we’ll see you all soon.

Team BLE got the ball rolling on Wednesday with a practice at the Big League Dreams, playing on the Crosley Field replica. Used by the Cincinnati Reds from 1912-1970, Crosley Field held the 1st ever major league game under the … Continue reading →