“Albie” Lopez graduated from Mesa Community College and was drafted by the Cleveland Indians in the 20th round of the 1991 Major League Baseball Draft. He spent 5 years with the Indians, compiling a record of 12-14 with a 5.99 ERA between 1993 to 1997. In 1997 Lopez was selected by the Tampa Bay Devil Rays in the second round (48th pick overall) of the expansion draft in 1997. In 1998, he had a career best 2.60 ERA in 54 games for the expansion team Devil Rays. In 2000, Lopez was a swingman, appearing in 45 games while also starting 24 games for the Devil Rays. He won a career high 11 games while throwing 4 complete games and 2 saves. 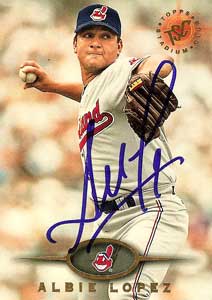 The Devil Rays then traded Lopez to the Arizona Diamondbacks in 2001 in which he was part of the World Championship Diamondback team.  Albie also played for the Atlanta Braves, Kansas City Royals, Pittsburgh Pirates and Seattle Mariners organization during his tenure in the bigs. During an 11-year baseball career, Lopez compiled 47 wins, 558 strikeouts, and a 4.94 earned run average. He was an Eastern League All-Star with the Canton-Akron Indians, which was the Indians’ Double A affiliate in 1993. Lopez pitched during the 2011 season for the Edmonton Capitals of the North American League.