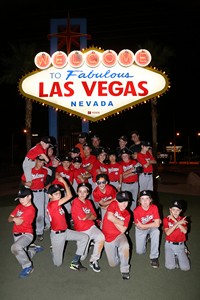 Team BLE got the ball rolling on Wednesday with a practice at the Big League Dreams, playing on the Crosley Field replica. Used by the Cincinnati Reds from 1912-1970, Crosley Field held the 1st ever major league game under the lights!

After getting their plane legs loosened up, the BLE players went through a base running drill with Coach and Ex-MLB’er Bob Didier. The boys then went into their throwing program with Coach and Ex-MLBer Albie Lopez and right into specialty work, getting a ton of ground balls, fly balls and catching drills.

Once the players rotated through their defensive work, team BLE got their bats and worked with Coach and Ex-MLBer Shea Hillenbrand. Players listened to coach Shea talk about having a soft focus on the pitcher and allowing themselves to always be on-time.

Coach Marty arranged for each team to play exhibition games before the tournament, so the teams headed out in the vans and rocked out en route to the game fields. Both BLE teams were victorious while allowing several pitchers to get innings and everyone at-bats to get prepared for tourney time! 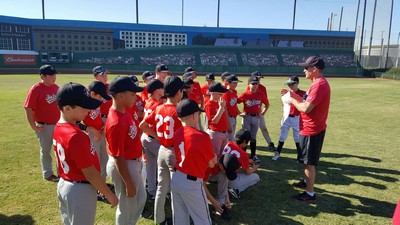 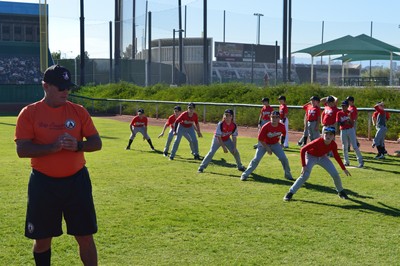 The BLE Crew headed back to Crosley Field at the Big League Dreams complex for another workout plus an intrasquad game to get more pre-tournament game action. The players ran through more baserunning and defensive work before hitting on-field batting practice with the awesome Crosley Field wall as a backdrop. 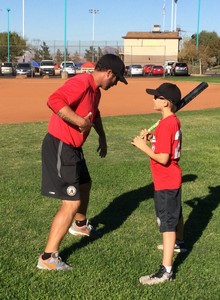 After both teams took batting practice, the Crew jumped into an intrasquad game between the 11u’s and 12u’s. Pitchers threw against their own team, creating some good competition between the teams and players. Both teams showcased positives and areas to improve during both exhibition games and intrasquad that allowed the coaches to grasp a feel of each team moving into the tournament.

Thursday night, the team met at the Midway inside Circus Circus and played carnival games as a group, from target shooting, horse racing and a basketball competition where players raced the clock against Coach Kyle. From there, the posse of players and parental onlookers moved to the Adventuredome! With 2 roller coasters, a Disk-O Spinner, the SlingShot, an Inverter and Bumper Cars, the kids enjoyed each others company for 2 hours, gelling as a group. Fortunately no one got sick and everyone parted ways to get a good night’s sleep before the start of the tournament Friday morning. 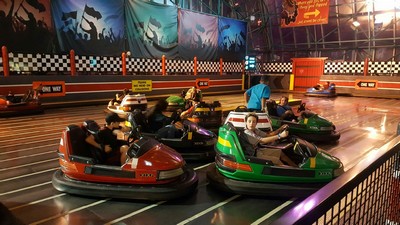 Early morning for the 12u squad, leaving the hotel at 6:30 for their first of two back to back games. BLE 12u took an early lead in game 1 and never looked back, winning against the CBA Pumas, 5-1. In game 2, the heat and early morning stalled the BLE momentum, as they came out flat and were shutout, 6-0 by the Louisville Slugger Surf out of California (who lost in the Championship game). 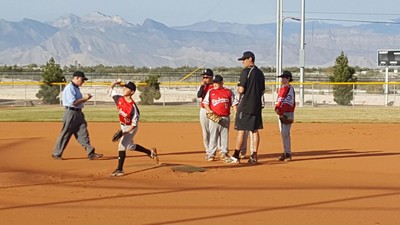 The 11U team opened vs the Colorado Lightning and started slow, down 6 by the last inning. BLE stormed back to get 5 runs but fell short, losing their opener 10-9. Game 2 against the Canejo Royals saw the BLE squad stay close from solid starting pitching but after a few errors, the team lost by mercy rule.
After a long day at the field, both teams regrouped Friday night to prepare for 2 more games on Saturday.

Another early morning for both teams, with the vans departing at 6:30 from Circus Circus. The 11u’s came out hot, making diving plays and hitting the ball around the yard, taking a 10-6 victory against the Las Vegas Halos. Carrying that momentum into game 2, BLE 11u stayed with the 2-time Champion, Louisville Slugger Surf, until the last inning. With the bases loaded, the BLE pitcher was squeezed and the Surf literally walked-off their victory, 7-6. Having saved their best two games for Saturday, BLE 11u left the tournament on a high note.

A win and two low-scoring affairs would allow the 12u’s to move on the playoff round. Unfortunately in game 1, the Swarm (eventual champions), put up a strong 1st inning offensively. The BLE 12U stayed tough, foregoing an early mercy by playing good defense and getting a strong outing by the bullpen. Up next were the Las Vegas Blazers. BLE went out to an early 2-0 lead, but the bats went cold and the Blazers finally got to our starter in the 4th inning off of a few unfortunate miscues. Down 5-3 in the 6th, BLE got the bases loaded but were unable to push any runs across. 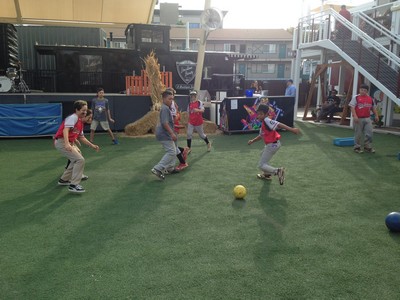 After the games, the two teams met at the Container Park in Fremont. Assembled out of old shipping containers, the park has 3 slides and a playground, a stage and a dozen shops and restaurants to cater to all ages. The players and families enjoyed the music, food and a soccer game amongst the boys.
The BLE Crew headed down the strip Saturday night, running into the peaceful Anti-Trump protests near Trump Tower.

Though the teams did not make it into the playoff rounds, they were privy to PHEWSIONEERING!!!, the speed program created by Ed “GoGo” Lovelace. “GoGo” gave the kids an hour long session introducing them to Elite/Olympic running styles to help each player achieve the maximum amount of speed their body can access. The players were run through walking, jogging and sprinting drills then were given several stretches and core exercises they could do at home. The cutting edge ideology was a great opportunity for the players to understand the determination and focus necessary to get into the highest levels of sports. 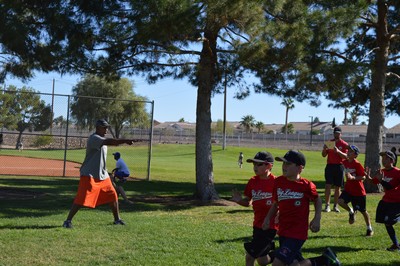 BLE is looking forward to working with GoGo Lovelace down the road, so stay tuned for future opportunities!
Following the workout with GoGo, team BLE went over the throwing program and hitting approach with the coaches one last time before getting together for one last BLE break. Las Vegas 2016 will go down as one heck of a trip, from the Adventuredome, the Big League Dreams facility, the tournament experience and the awesome running clinic by Ed “GoGo” Lovelace. Don’t forget your Million Dollar Walk!!!

Las Vegas, Nevada – February 11 – 15 Team BLE 13U and 14U team made its’ way down to Las Vegas for a mini camp and then compete in the competitive Red, White and Blue classic tournament being held over … Continue reading →