” Best of the West ” A Great Weekend of Baseball

With games being rained out on the coast and snow still on the ground east of the Rockies the “Best of the West” didn’t miss a beat and baseball was being played in Kamloops.  With temperatures reaching a high of 16 degrees and a mix of sunshine throughout the days all games were played and teams were excited about the competition and getting the season under way.  Starting on Thursday through the Sunday, 41 tournament games were played in the Bantam and Midget/Premier level along with 6 college games at the impressive MacArthur Island baseball complex.   The tournament was once again hosted by The Big League Experience (BLE) along with Thompson Rivers University Baseball and sponsored by KR3 Bats.  Along with the Baseball Tournament the British Columbia Umpires Association also held its annual National certification and provided quality officiating throughout the weekend. 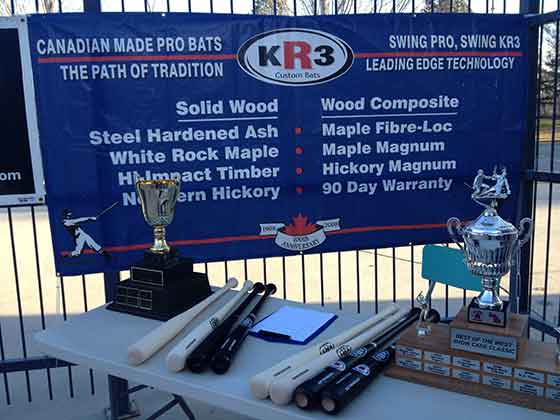 In the Premier division:  This division of the tournament is an Invitational Showcase tournament in which teams must qualify from either last year’s tournament or through the fall qualifier and is comprised of 10 teams from throughout Western Canada.  As this tournament is a desirable tournament that has some of the best high school talent in the country participating, many scouts from a number of Major League Baseball clubs and college coaches make their way to Kamloops to get an early season look at the talent.  The tournament  coordinator (Big League Experience camp owner) and Philadelphia Phillies scout Marty Lehn commented, “this is a great opportunity for the scouts to have a one stop shop to see the best talent in Western Canada”.  In the past many of the participating players have moved onto to the college and professional baseball ranks, such players include Toronto Blue Jays 3rd baseball Brett Lawrie and Colorado Rockies 1st baseman Justin Morneau.

The tournament always has a mixture of teams from both sides of the Rockies and this year was no different as 4 clubs from Alberta – the Okotoks Dawgs, Vauxhall Baseball Academy, St. Francis Xavier Academy and Edmonton Prospects along with 6 from west  of the Rockies included defending champions Langley Blaze, Parksville Royals, Victoria Mariners, North Shore Twins, North Delta Blue Jays, Okanagan A’s made up the 10 team tournament.

In round robin play the North Shore Twins and Langley Blaze went undefeated with 3 – 0 records and advanced into the playoff round as the #1 and #2 seed teams.  The Okanagan A’s won their pod with a 2 – 1 record and went in as the #3 seed with the Okotoks Dawgs grabbing the Wildcard spot.  The Semi final action had The Okanagan knocking off North Shore 8 – 4 and the Langley Blaze squeaking by Okotoks in a great SeeSaw battle 8 – 7.  In the Championship game the Blaze had the pitching depth on the mound and scored first and never gave up the lead to win their 5th “Best of the West” Championship in a row. 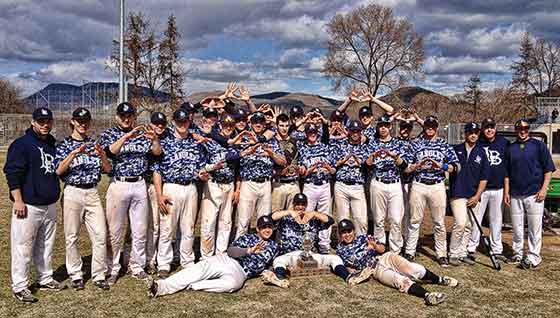 In Bantam action 9 teams battled throughout the weekend and played some great baseball in a number of very close games. In round robin Play: Pod A was about a competitive division as it gets as all five teams could have beat each other on any given day and many games were decided by one run.  Advancing to the championship game due to an undefeated record of 4 – 0 record was the White Rock Tritons  and the Okotoks Black team qualified to the semi final game with a 3 – 1 record and faced Pod B winners Saskatoon Cardinals.

Other teams in Pod A that played very well were the Nanaimo Pirates, Spruce Grove White Sox and Okanagan A’s who all  ended up with 1 – 3 records which could have been 3 – 1 records as a number of their games were decided by one run and could have gone either way.  Nanaimo did win their cross over game and finished with a 2 – 3 record on the weekend and will no doubt be a team to be concerned about this year in Bantam AAA.

In Pod B action Saskatoon was undefeated with a 3 – 0 record and qualified for the Semi Final game, Prince George ended the weekend with a  2 – 2 record for the weekend and Kamloops and Okotoks Red ending up with 1 – 3 records.

In the Semi final game, it was a well fought battle in which the lead changed a couple of times and ended up with the Okotoks Black advancing to the Championship game with a 14 – 8 victory.  The Championship game matched that Okotoks Black team vs. White Rock in a great game that was tied at 1 through four and then White Rock tacked one in the 5th and 3 in the 6th to win 5 – 1.  Congratulations to a great final and two well coached teams. 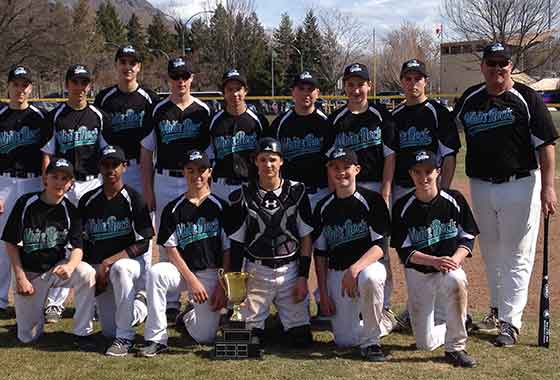 All in all a great weekend for Baseball and we at Big League Experience congratulate all clubs for competitive play and sportsmanship and wish you all the best of luck this season.