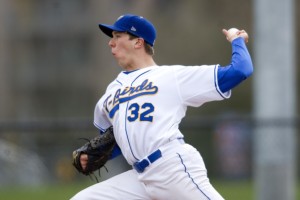 Milwaukee Brewers scout and Big League Experience owner Marty Lehn is happy with this year’s MLB draft as he was finally able to get the monkey off his back and draft a player from the University of British Columbia.   It’s been a couple of year’s in which Lehn has been in the hunt to get a Thunderbird but other teams beat the Brewers to the punch. Not this year as the “Brew Crew” selected David Otterman a Left handed pitcher from Coquitlam in the 7th round. Lehn comments “It’s a great program and Terry and his staff do a great job and I am excited to be able to finally get one of their guys”. David is a hard throwing Left hander that has been UBC’s #1 pitcher over the past two year’s.  With a fastball reaching 92 MPH and the ability to mix it up with his breaking pitches and Change up has proved havoc to the hitters at the college level.   The next step for David is to report to Arizona (training facility of the Brewers) for mini camp and then be placed with one of the minor league clubs.  Good luck David and we’re looking forward to seeing you help the Brewers win a championship one day.

Here is a list of players Marty Lehn has drafted/signed over the past 5 years while with the Brewers;

At this time in the year, athletes are gearing up for another great season of baseball, and players and parents often ask me about getting to the next level, playing college sports. There are lots of great opportunities out there, … Continue reading →